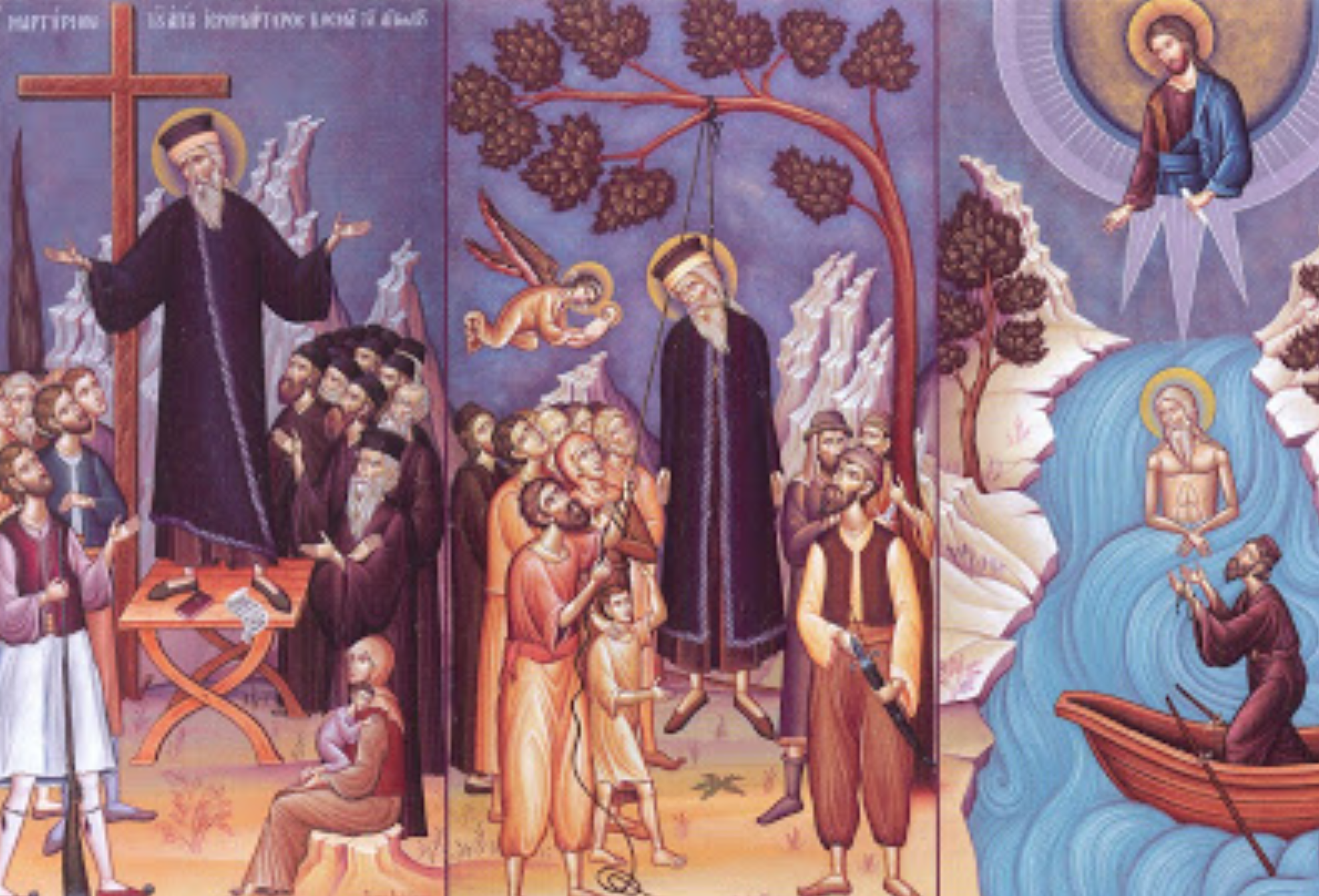 St. Kosmas (1714-1779) was a monk in the Holy Mountain Athos, Greece, and preached to the Christian Greeks during the occupation of Greece during the Ottoman Empire. He was born in 1714 in the Greek village Megalo Dendro (Big Tree) in the region of Aitolia. On August 24, 1779 he was executed at Kolkondas, Fier District, near the mouth of the Seman river (in present day Albania) by the Ottoman authorities. There were no formal charges against him.

St. Kosmas studied in Mount Athos, in “Athonias School”, and later he became a monk in Philotheou Monastery. He also begin missionary tours in the villages with the aim of educating the poor people and to help people understand the Scriptures better (some say to prepare the way for the coming liberation of Greece). In a period of six years he managed to establish 250 schools as well as charities and rural churches. St. Kosmas not only predicted the Independence of the Greeks from the Ottomans, but refers to later events such as WWI, WWII and perhaps events in WWIII. Some of those prophecies are shown below. 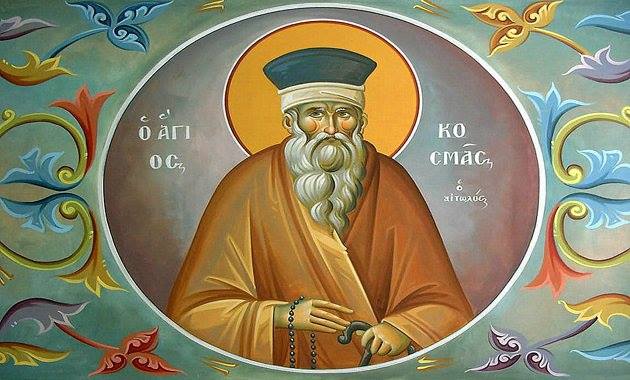 Some Fulfilled Prophecies
Many of the following prophecies were made 100+ years before the technology was invented.

56. Time will come when there will not be this harmony, as in our days, among the people and clergy.

57. The clergy will become the worst and most impious of all.

84. The time will come when the devil will make his turns with his pumpkin. (global communications sattelites, GPS, etc).

117. You will see in the field a carriage without horses running faster than a rabbit. (the invention of the automobile)

118. A time will come when the earth will be girded by a thread (electrical power grid and telephone lines, and the internet/“world wide web”).

119. A time will come when people will speak from one distant place to another, as though they were in adjoining rooms-for example, from Constantinople to Russia. (Telephone, IP webcams, etc).

120.You will see men flying in the sky like starlings, and throwing fire on the earth. Those who will live then will run to graves and will cry out: “Come out you who are dead so that we the living may enter.”

Prophecies on World War III and the Liberation of Constantinople
3. Those of you who will be up in the high mountains at that time will be fortunate indeed, for the mountains will protect you from many evils. You shall hear but not see the danger. You shall suffer during three hours or three days only.

8. The borders of Greece will reach up to the river Aoos (Vovousa).

13. When the trunk of this tree will close up completely, encasing this pole, then the desired event will materialize. A certain sign will take place, but you should not panic. You ought to go westward to the mountains of Omalia and Merope, this way many lives will be saved. Do not take anything along, you should only be concerned with saving your lives. The evil will not last more than 24 hours.

17. When you see the great fleet (“one thousand ships”) in the White Sea, then the desired event will arrive”

18. When you see the “one thousand ship” in Greek waters, then it will come”

19. When you see the thousand-ship fleet in Greek waters, then the Constantinople question will finally be resolved

21. In Aulona a great destruction will take place. Armies will arrive to liberate the land.” Aulona is currently in the country of Albania.

30. The enemies of Christ will leave, but they shall return. Afterwards you shall chase them till the ‘Red Apple Tree’.

48. They shall try to resolve their differences with the pen, but they shall fail. 99 times by means of war and one time by means of the pen.

49. If 3 powers are found to agree, nothing bad will happen to you.

50. If the matter is solved by war you will suffer many disasters. In three countries one will remain …

58. In Constantinople so much blood will flow, that a three-year old calf could swim in it.

59. Fortunate he who will survive the general war. He will eat with spoons of silver.

60. After the general war the wolf and lamb shall live together in peace and harmony.

61.First a false Greek will come. Do not believe him. He will go back.

62.The warships will gather together in Skaloma and the red-vested will come to fight for you.

66.Do not make big houses. Make makeshift shacks so that they do not come in.

67.They will try to enforce a huge and unbearable tax, but they will not make it in time.

68.They will put a tax on chickens and on windows (other version say or on cows)

69.They will seek to take you as soldiers, but they will not do so in time.

70.The Turks will learn the secret three days sooner than the Christians.

71.When you hear that the war has started from below (the south), then it will be near.

73.The crags and the pits will be full of people.

74.It will come quickly. And either the ox will be in the field or the horse on the threshing floor.

75.It is sad for me to say it to you: today, tomorrow we will endure thirst and great hunger such that we would give thousands of gold coins but still will not find a little bread

76. After the war, the survivors will be running for a half an hour before they can find any survivor to embrace as a brother.

77.Do not plant vineyards because they will be ruined like the ones in Dryinoupolis.

78.There will be a kingdom of paper (red tape) which will have a great future in the East.

79.The world will become so poor that it will clothe itself with tendrils.

80.The cause will come from Dalmata (Serbia).

82. France will liberate Greece, Epirus will be liberated by the Italians. [* It is interesting to note that Numbers 81 and 82 are very consistent with some of the prophecies of the Great Monarch described in some of the Western Catholic Prophecies, it is hard to believe in the current state of Europe that the French would come to the aid of the Greeks]

83. Through three narrow passages, namely, Kra, Krapsi and Mouzina many armies will advance on their way to Constantinople. It would be a good idea for women and children to take refuge in the mountains, during this time. They will be asking you to know how far away is Constantinople. Do not tell them the truth, for they could mishandle you. This army will not reach Constantinople. Halfway it will be informed that the war is over.

86. Freedom (liberation) will come from the bottom part of the region where the waters pour out.

90. Curse the Pope, because he will be the reason.

95. Supplicate that it will be day and not night, summer and not winter.

105. A lot will happen. The cities will end up like shanty towns.

109. You must have the sign of the cross on your forehead so that they can recognize you as Christians.

110. The army will not reach Constantinople. In the middle of the way, the news will arrive that the desired event already occurred.

115.You will become a great man, you will conquer all of Albania, you will subjugate Preveza, Parga, Souli, Delvino, Gardiki, and the very stronghold of Kurt Pasha. You will leave a great name in the world. Also, you will go to Constantinople,…but with a red beard. This is the will of Divine Providence. Remember, however, throughout the duration of your whole reign, to love and defend the Christians, if you want your successors to retain their power.
[This prophecy perhaps a reference to the legend of the “Last Roman Emperor” or “Great Monarch” who is to reign after the war for Constantinople – i.e. refer to the prophecies of St. Leo the Wise, Agathanghelos or St. Methodios of Pataras]

“I came to your village and I preached to you. It is thus just for you to pay me for my effort. With money perhaps? What would I do with it? My payment is for you to put the word s of God in your hearts, that you main gain eternal life,” – Saint Kosmas the Aitolos